When Louise Shortt was struggling to conceive, she turned to an alternative therapy, she tells Fiona Dillon 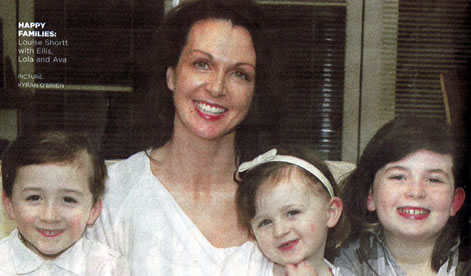 SUCCESSFUL businesswoman Louise Shortt turned to acupuncture after trying unsuccessfully for a year to become pregnant for a second time.

“I had a child who would have been four at the time,” says Louise (40) from Walkinstown “I had absolutely no problem conceiving the first time round at all.”

Louise became concerned when she failed to become pregnant, even though there appeared to be no medical reason for it and she already had had a child.

She took expert advice and her GP referred her to a consultant in the Coombe Women’s Hospital, but the tests carried out found nothing wrong. Acupuncture never crossed her mind until she read an article about Karen Costin, a Dublin-based acupuncturist (see panel on facing page).

Given her age (36) at the time, had acupuncture not worked, IVF may have been the next step for her. But it was a decision that she happily never had to make.

“I went to see Karen and I was pregnant again within six months,” Louise recalls.

She and her husband were delighted with the birth of their son, Ellis, who turned four last month, a brother for Ava, who is due to turn nine this month.

“I continued to go for acupuncture throughout the pregnancy. I worked right up until he was born, and I had a natural birth,” says Louise.

Since then, there has been another addition to the Shortt family. “When Ellis was about nine months we decided to try again. And almost immediately, I became pregnant. Lola, has just turned three,” says Louise.

Louise, who runs her own beauty salon called Simply Elegant in Crumlin, says that she felt acupuncture helped “my circulation, my metabolism, everything. I felt fantastic”. She continued to get acupuncture throughout her third pregnancy.

“My energy levels were very good. I was back to work within about six weeks of Ellis’s birth.”

Louise was in good health, even though she was working full time while heavily pregnant, which she attributes to the acupuncture: “I felt better for it.”

She says that when she received acupuncture, the area would be heated with a compound first before the needles were inserted.

“I purposely didn’t look at where she was putting them,” she says.

Myleene says her daughter Ava (3) was a surprise, so she wrongly assumed it would be easy to get pregnant again.

“It’s been tough. You get to the stage where every month you’re waiting, and then when you’re not pregnant, it’s so disappointing,” she reveals.

Myleene says her doctor told her to relax and try for a few more months. Happily, she is due to give birth in March.

We use cookies to ensure that we give you the best experience on our website. If you continue to use this site we will assume that you are happy with it.OKPrivacy Policy